A recent post on Tetrapod Zoology in which blogmaster Darren Naish rails against the well-meaning tradition of feeding bread to ducks got me thinking of another bird-feeding issue: chumming for pelagics.

My pelagic experience is limited, but on a couple of the trips I’ve been on the chum of choice was stale popcorn. This strikes me as insane. Gulls can probably digest almost anything, but the procellariiform birds that are the most sought-after prizes of pelagic excursions (shearwaters, petrels, albatrosses, etc.) have digestive systems adapted to digest protein. Why, other than economy, would we feed them almost pure carbs? The soft parts of popcorn probably disintegrate readily, but what do the hard bits do to the birds’ digestive systems? Given that these are pelagic birds, would we even know if they were dying like flies from popcorn impactions? Has anyone studied this? Talk me down, somebody…

Addendum: Procellariids do ingest some pretty formidable items. Bones, even fish otoliths, are rapidly dissolved by the birds’ digestive acids, but squid beaks (one of the hardest materials in nature) take weeks to break down. Gulls, terns, and many other seabirds can simply barf up indigestible materials, but procellariids have difficulty regurgitating solids (Furness et al. 1984). Combined with relatively small gizzard capacity, this makes them “especially susceptible” to deleterious effects from ingestion of indigestible materials (Azzarello & Van Vleet 1987).

More complex organic molecules require particular enzymes for processing. Just as many adult humans don’t produce the enzyme lactase and must avoid milk products, some birds such as thrushes (Witmer and Martínez del Rio 2001) don’t produce sucrase and must avoid sucrose-rich foods. Given their naturally low-carb diet, would we expect procellariids to produce starch-digesting amylase? If they don’t, does popcorn cause them intestinal distress similar to that suffered by lactose-intolerant humans and sucrose-intolerant thrushes?

But even if procellariids that eat the popcorn we chum with eventually end up barfing it up or breaking it down, is it their best interests or ours to trick them into wasting time and crop space on something that is at best of low nutritional value when more appropriate alternatives are available?

I’m in geek heaven! Tens of thousands of Monty Python videos are available on YouTube, illegally uploaded by intellectual property pirates and copyright-ignorant twits. Now the surviving members of Monty Python have struck back by creating their own YouTube channel with high-quality versions of those same clips and much more.

It’s time for another I and the Bird, this time coming to us in biodi-verse from Canada, the home of winter, and Seabrooke Leckie of The Marvelous in Nature. Bundle up for a frosty but tasty picnic!

From an art blog that shall remain nameless comes another pretentious artist, this time working in the medium of chewed parrot toys instead of Necco wafers. I admire artists who use discards in their work to make an environmental statement, but this is just silly as well as unattractive. At least there’s no parrot poop on them (but if there was I’m sure some art critic would gush over that even more).

Her pierced metal pendants are nice, though. 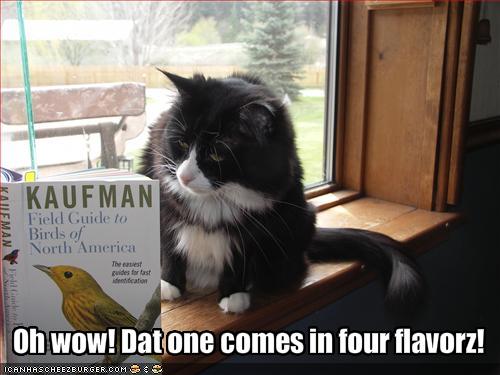 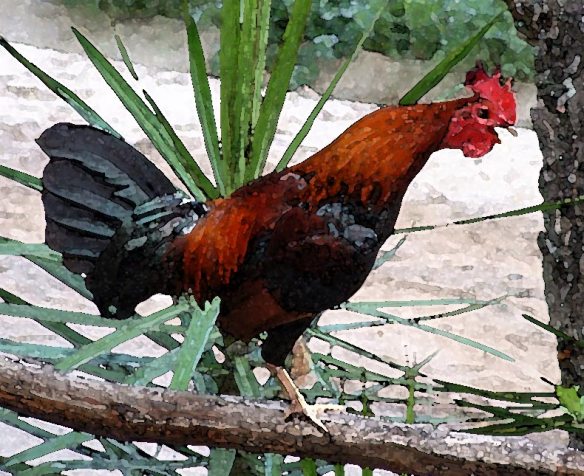 from an original photo by Juan Tello, licensed by Creative Commons

Woo hoo! I’ve just learned that my recent post “Do we see what bees see?” has been selected as one of 50 winners (out of >500 entries over 800 entries) for The Open Laboratory: The Best Writing on Science Blogs 2008. It’s so exciting to see Life, Birds, and Everything right up there with some big names in the science blogosphere, including some of my regular reads such as fellow bird blogger GrrlScientist. The anthology will be available shortly as both a book and a download from Lulu.com.

The illustration above (from a photo by Juan Tello, Creative Commons) serves double duty, because this year my dear husband Tom presented me with my second favorite gift of my adult life: chickens. Okay, I didn’t actually get the chickens, but Tom’s donation to Heifer International in my honor will make it possible for rural residents in Central America to receive chicks to start their own flocks. I love chickens, and Tom said maybe someday we’ll get some of our own, but in the meantime this is a gift I can feel good about and won’t have to feed and clean up after. (My favorite gift? An acre of tropical forest in Belize that Tom adopted in my honor.)

All content © 2007-2018 Sheri L. Williamson. All Rights Reserved. Unless otherwise indicated, all text, images, and other content on this blog are automatically protected under international copyright law and may not be republished, reproduced, distributed, or adapted in any way without the express written permission of the author.